Drilling at Duke Exploration’s Mt Flora copper prospect within their Bundarra Project in Queensland has finished and the laboratory results are beginning to come in and are looking very positive. Initial results are showing significant zones with copper grades higher than measured by the PXRF. The official lab results from ALS Townsville are eagerly awaited, and will be reported as soon as we have them.

Associated Exploration Drillers (AED) were contracted for the drilling, which took place over 27 days and 10 nights in October. Three diamond holes for a total of 550 m were drilled using their track mounted rig. Kenex representatives were there for the duration, logging core and managing the programme.

Historically, five main lodes were worked at Mt Flora: Douchang, Essie, Flora, Green Outcrops and Eastern Lodes. Numerous shafts, to a maximum depth of 38 m, adits and surface workings were developed, many of which are still open and evident today. These lodes were drilled by Endeavour Oil in 1975 with very encouraging copper, silver and gold mineralisation. Duke planned to follow up these historical results, aiming to intersect all the main veins, sample continuously across the vein systems, and to get a better idea of the widths, extents and grades of the mineralisation.

The lodes were intersected very close to the predicted locations (Figure 1). This has given confidence in the existing data, and has confirmed that the lodes are depth extensive. 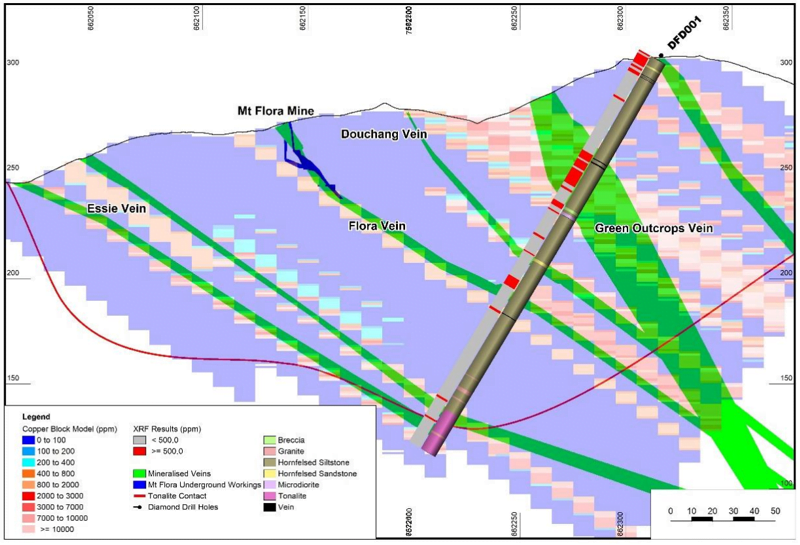 Drilling intersected a large sequence of hornfelsed metasediments (siltstone and sandstone), which are the host rock to the lodes. All three drill holes intersected bedrock from surface, with the base of complete oxidation between 18 and 26 m vertical depth. A microdiorite dyke was intersected in DFD001 and DFD002, and tonalite was intersected at the bottom of all three holes. This is cut by multiple dykes, variably aplitic, pegmatitic and porphyritic. Petrography and geochemical analyses are planned to confirm the intrusive rock types. Alteration in the holes presents almost exclusively as vein selvedges. Intensity of alteration varies, and is related to vein intensity. Alteration is sericite-silica-chlorite in varying proportions, which results in bleaching of the hornfelsed siltstone surrounding the veins (Figure 3). Pervasive silicification or pervasive chlorite or sericite alteration is present in small intervals, which are generally intensely veined.

The mineralised veins occur as massive sulphide veins up to 30 cm wide down-hole, as well as in clusters of smaller 0.1-0.5 cm wide veins. Increased alteration and quartz and chlorite veins are present around the massive chalcopyrite veins.

Wireline logging by Borehole Wireline has given additional vital data, with optical and acoustic televiewer, density, magnetic properties, natural gamma radiation and resistivity all measured. Structures can be logged from the images (Figure 8). The physical properties of the different rock types, veining, and alteration can be characterised, and will provide critical information for future RC drilling. The wireline logging has shown a correlation between copper (sulphide) mineralisation and conductivity, and it is hoped that a 3D IP survey will image the veins, reducing the risk and expense of drilling. The 3D IP survey is being planned for January-February 2020, and following this, a large RC drill programme will be planned with the aim of delineating a resource. 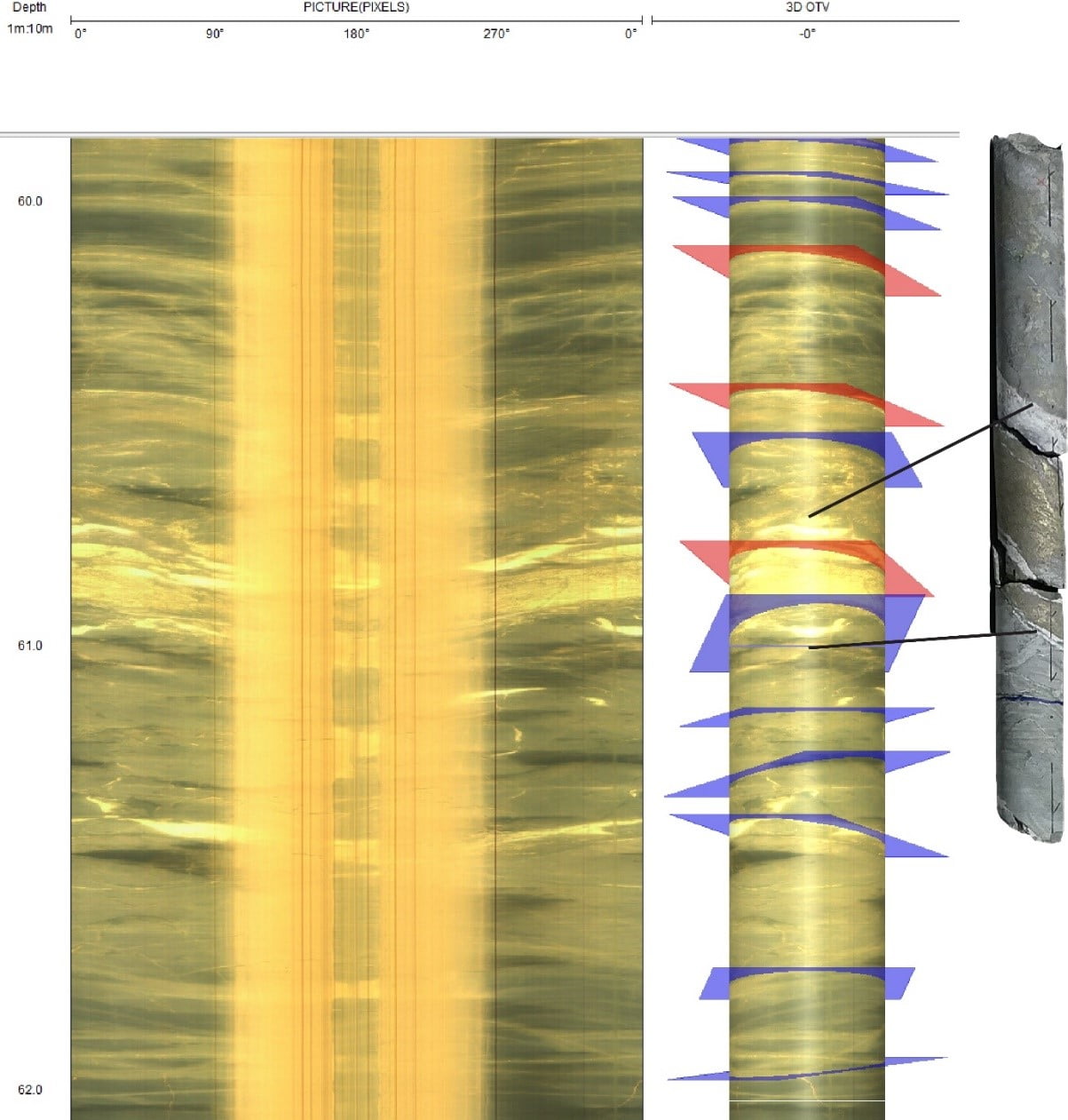 Figure 8. Optical televiewer images with logged structures, compared to an image of the drill core

Back to Blog
Subscribe to receive the latest news and updates