Lithium is a major component in advanced batteries and is therefore a critical element to the green technologies sector. Because of the predicted increase in future demand for Li the need to understand the overall potential for Li mineralisation in New Zealand has come to the forefront. Consequently, a New Zealand-wide mineral potential model was generated by GNS Science and NZP&M. It combined two mineral systems for Li deposition: Li-Cs-Ta pegmatites associated with peraluminous granitoids, and hydrothermally altered rhyolitic lacustrine sediment-hosted deposits.

In the Taupo Volcanic Zone (TVZ) efforts are underway for extracting Li directly from active hydrothermal systems, and commercial interest is also shown in the hydrothermally altered, lithium-rich sediments. In the TVZ, where the Li is exclusively associated with hydrothermal activity, the model highlights areas that have increased potential for economic Li, with most targets clustering in the lake district of Rotorua. 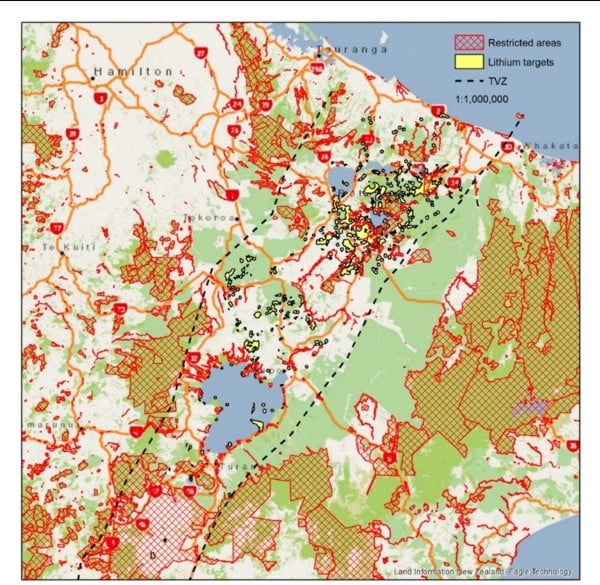 Country-wide model targets in the TVZ

The country-wide Li model has been used as a guide by Kenex for developing a finer-scale mineral potential model over the TVZ, focussing on hydrothermally altered sediment-hosted lithium deposits. The relevant predictive maps from the original model were recreated with this narrower focus and better resolution, and additional data was added to the model. Buffer distances and weights assigned to the predictive maps were evaluated to increase relevance to the TVZ mineral system.

Lithium is a large-ion lithophile element that behaves incompatibly during magma crystallisation; it will be among the last elements to leave the melt. It is therefore enriched in fractionated granitoid rocks and volcanic equivalents which are common in caldera settings such as the TVZ. It is readily soluble during weathering and will concentrate in sediments, hydrothermally altered clays, brines and geothermal sources. Kenex model shows target locations dependent on nearness to Cenozoic faults and fractures which are conduits for rhyolitic melts and fluids, as well as for geothermal activity.

Similar to the country-wide model, the TVZ Li model is run as a Fuzzy Logic model, combining the relevant predictive maps using fuzzy operators and weighing them based on expert knowledge. The maps are combined into the final mineral potential model relevant to the TVZ Li mineral system. The final model presents the complete range of potential for Lithium in the TVZ from 0 to 1 (0 = no potential; 1 = most potential). Based on this, targets have been defined that represent the areas with the most potential. This new set of targets provides more detail and accuracy in targeting Li mineralisation due to the focus on a single mineral system and the high resolution of the model. 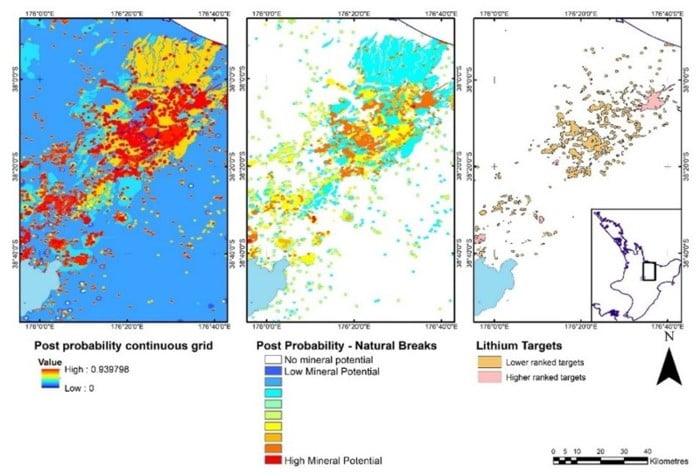 The process of creating targets for the Li mineral potential model (from Beck et al, 2018).

Information can be attributed to each target polygon to help analyse, rank and prioritise the targets. Target attributes include model parameters, such as the final probability value, which enables the ranking of target areas by the geological potential. Additional attributes such as proximity to infrastructure, restricted land, land ownership and permit status, and historical exploration can help to assess the ease of access, whether the ground is free and whether the ground has been explored in the past. When the targets have been attributed and ranked, they can be used to develop a portfolio of priority projects for further research and potential acquisition.

Regional-scale targets in the TVZ