Using our GIS expertise and the economic expertise of Richard Schodde of MinEx Consulting, Kenex have completed a spatial analysis project on Canada’s National Infrastructure for the Prospectors and Developers Association of Canada (PDAC). The project aim was to identify the Canadian districts where strategic investment in enhancing the infrastructure network could stimulate the development of new mines, by reducing the overall capital costs of production, and by virtue enhance regional economic development opportunities. This was achieved by spatially analysing the relationship between infrastructure-deficient regions, the location of significant undeveloped mineral deposits, as well as typical capital and operating costs (CAPEX and OPEX) for the differing deposit styles and sizes.

The work was divided in three main stages. In the first stage, a GIS was compiled of all relevant data for the entirety of Canada. It contains files of existing infrastructure, protected or reserved areas, population, topographic, and climate data.

The GIS database was used in the second stage to create a map of existing infrastructure in Canada, integrating information on the distribution and quality of local roads, rail, power, ports and airports, climate and terrain features, and population density. Using the fuzzy logic spatial data modelling technique, all relevant datasets were weighted according to their importance for mining, and integrated into a countrywide map that shows the relative proximity to infrastructure of each given location. This “remoteness” map effectively identifies areas with undeveloped/underdeveloped infrastructure.

In the third and final stage, a map of mining projects and undeveloped deposits was created, showing location, type, size, and status of the projects for the entire country. The deposits were then divided in three main categories:

The CAPEX and OPEX were calculated for the different infrastructure needs of the deposit categories, and translated into GIS variables of cost per kilometer. The variables were reclassified based on the CAPEX and OPEX cut-off values and then weighted and combined with the remoteness map using fuzzy logic operators. This step allowed the creation of three heat maps tailored for each deposit type. Each map identifies not only areas where new infrastructure is needed for developing a new mining project, but also what type of infrastructure is required to make the deposit economically feasible.

The model results have enabled the PDAC to work with relevant provincial and federal government agencies to prioritise the most prospective mining opportunities in infrastructure deficient areas, and therefore propose a workflow of possible enhancements to local infrastructure to encourage the development of new mines in the identified areas. The full report is available on the PDAC website. 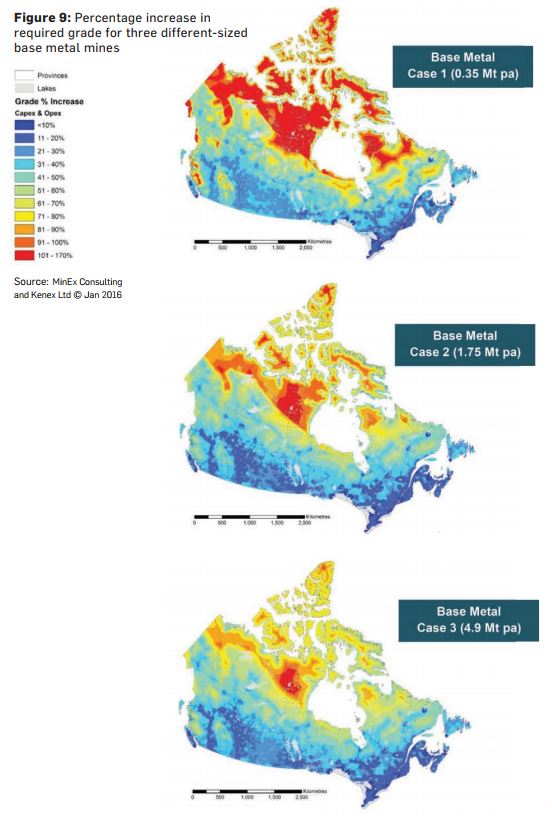 Examples of base metal heat maps from the report.